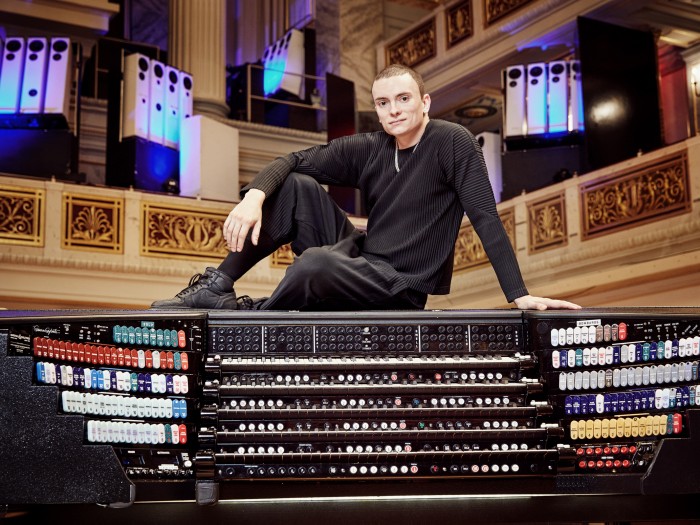 Sony Classical announces the release of the new album by exceptional American organist Cameron Carpenter, with both his first orchestral recording and his first live-concert recording. This release features an original version of Rachmaninoff’s Rhapsody on a Theme of Paganini, recorded live at Berlin’s Konzerthaus, paired together with Poulenc’s popular Concerto for Organ, Strings and Timpani. This world-premiere version of Rachmaninoff’s Rhapsody demonstrates Carpenter’s extensive musical skills: he arranged the original piano part for organ himself. The album programme is completed with Vierne’s Organ Symphony No. 1, recorded live as the concert encore. Carpenter is joined by the Konzerthausorchester Berlin under renowned conductor Christoph Eschenbach, and all works were performed on his innovative International Touring Organ.

The album represents the culmination of Carpenter’s 2018 season as Artist-in-Residence at the Konzerthaus Berlin and is also a testament to his enduring friendship with Maestro Eschenbach, whom he first encountered whilst a student at the Juilliard School.

Carpenter explains the stimulus behind arranging Rachmaninoff’s piece: “I love and want to play this work. The question is then ‘How do I get my hands on this music, by any means necessary?’ As with many, even most, non-organ works, this requires the creation of a detailed transcription founded on study of the original.” The orchestral part remains unchanged, and what Carpenter performs here is “a recomposition for organ – guided by the original – of the piano part … it is a way of honouring a great work.”

Rachmaninoff’s arranged work is paired here with a key organ work originating from the same year (1934) – namely, Poulenc’s Organ Concerto. This recorded version remains faithful to Poulenc’s original score, but Carpenter explores his own ideas for the registrations rather than using the original published indications. Hence the Concerto may still sound new to those already familiar with the work. “Poulenc never composed for the organ before the Concerto, and his writing for it is made all the more interesting thereby. In this Concerto are cynicism, despair, the dance and the street, yet with religious ‘devotion’ and death always looming behind. Think of Fellini, or Cocteau… The exotic combination of ideas in the composition should be reflected in the combinations of the organ.”

The International Touring Organ was built to Carpenter’s own specifications in collaboration with American digital organ pioneers Marshall & Ogletree, and launched in 2014. Like Carpenter himself, it represents a seismic shift in the organ world.  This custom-built instrument dispenses with traditional pipes and instead uses digitised sounds from instruments from across the globe, crucially allowing the exceptional sound definition required for the rapid virtuosic finger- and footwork that these pieces demand. “This organ is able to provide unprecedented clarity and speed of articulation," says Carpenter. “This is a clarity often missing from many of the ‘eclectic’ pipe organs of today. What is needed is an organ that’s both lushly hyper-expressive and infinitely subtle in shading and blending, yet unmistakably clear in counterpoint.”

Just as his instrument is redefining the organ world, so too is Carpenter. As the public broadcaster Kulturradio Berlin noted in their review of the live concert, “Carpenter is a breathtaking virtuoso … He can do everything.”